After our drive around the Scottish Highlands, we headed west in the direction of Ireland.  Taking the two hour ferry ride from Cairnryan to Larne, we directed our efforts to reaching Dublin.  Once in Dublin, we setup camp on the outskirts of town and used our camping spot for a home-base for four days in order to see all the city has to offer.

Ireland’s capital city, Dublin, has reminders of its moving history on every corner, from its dramatic statues to the names of the streets and squares Dublin remembers its fallen heroes and it’s fight for independence. This city has beautiful early Neoclassical buildings, ubiquitous pubs, lively shopping areas with musicians playing freely, and large grassy parks. It is also home to the  original Guinness brewery and Jameson’s distillery.

Guinness is the cheapest beer in the pub? This is a great country! Guinness plant in the background.

The people of Dublin were especially helpful and generous. We have met a number of locals that are willing to go out of there way to help, give directions, or tell us about their favorite sport – Hurling (https://www.youtube.com/watch?v=TmzivRetelE) or Gaelic Football (https://www.youtube.com/watch?v=TEAbWrdB9XU).  Watch the videos and get an idea of how passionate the Irish are about these two sports.

Trinity College has long been Ireland’s most prestigious college, so it was interesting to learn that it was founded in 1592 by Queen Elizabeth I to establish a Protestant hold in the town.  Originally only rich Protestant males were admitted, in 1903 women were allowed to apply as were Catholics.

The mostly Georgian (Neoclassic) architecture was beautiful, and they even had a “Berkeley Library”!  We also enjoyed watching a cricket match on campus in the light rain. 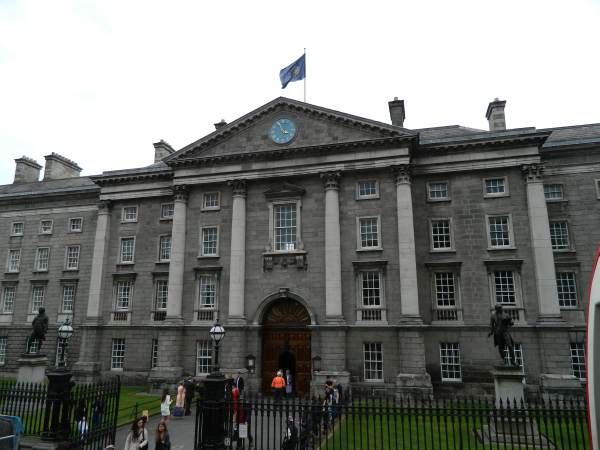 Even the road to Dublin has to wait for milking time

2 thoughts on “Off to Ireland”