Cliffs of Moher – (pronounced more) another incredible sight in Ireland. For five miles these dramatic cliffs soar as high as 700 feet above the ocean.

Interesting information from the visitor’s center:
“The rocks that make up the Cliffs of Moher were formed over 300 million years ago during the Upper Carboniferous period. Bands of Namurian sandstone, silt-stone and shale were exposed in a spectacular fashion and now scientist come and study this as an example of a sedimentary basin normally only visible under the sea. At that time a large landmass was located to the southwest of the ancient marine basin. Heavy rainfall on the land created great floods that washed sand and mud into ancient rivers that flowed to the sea. The sand, silt and mud carried by these large rivers were dumped into the sea at the mouth of a great delta (similar to the mouth of the Mississippi River as we know it today). Over the millions of years that followed, the sediments were compacted into solid rock and were pushed upwards due to movements in the earth’s plates. It these sedimentary rock layers of sandstones, siltstone, mudstone and shale that make up the Cliffs of Moher today.” 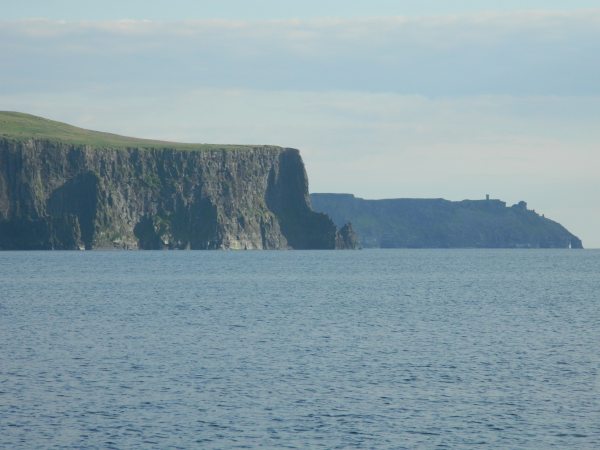 Northern end of the Cliffs of Moher

The dramatic limestone beaches along these shores have been quietly eroding away since the last ice age.  As we walked along these breathtaking shores, we marveled at their beauty and their history.

The Cliffs of Moher have been featured in many films such as, Harry Potter and the Half-Blood Prince(2009), and The Princess Bride (1987). It is also an important setting for Eoin Colfer’s  novel The Wish List,

Muckross House is a stately Victorian home at the edge of  Killarney  National Park.  We enjoyed our tour that included the estete withs its exquisite furnishings, and breathtaking gardens.

It was disturbing to go into the servants quarters after the opulence of the house. Located in the dark, damp basement, the upper walls were lined with 32 bells of various sizes, which were used by the owners and guests to summon the help. The servants were required to answer the bells at anytime of the day or night. 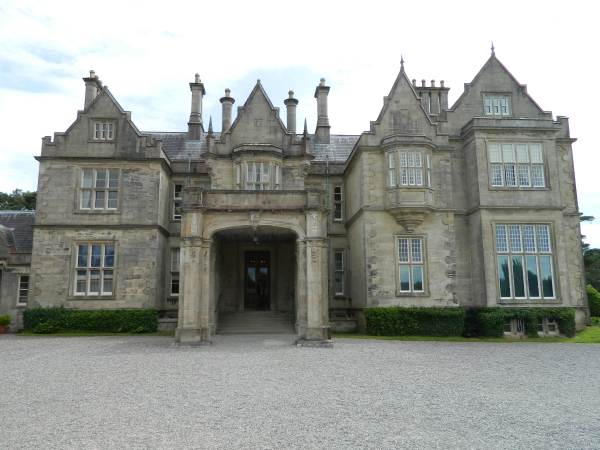 We peasants had to use the back door.

Ross Castle – stately and yet somehow elegant, this castle comes with its own ghost story.

We once again saw how each aspect of the castle was planned for defense.The spiral staircase, located in the front left corner, was built in a clockwise direction. Attackers, ascending up would have most likely had their sword in their right hand (If they were right handed) and would be impeded by the center structure of the staircase. Defenders, facing down, would have their swords swinging in the open section of the staircase, giving them an advantage. As you moved into and upwards in the castle, every move is a right turn, this continued to put right-handed attackers at a disadvantage (imagine holding a sward in your right hand and fighting around a doorway to the right).  In addition, the stairs were of uneven height to throw off an attacker’s charge by interfering with his gait. Interesting, I had never before given thought to the design of a defensive castle.  🙂 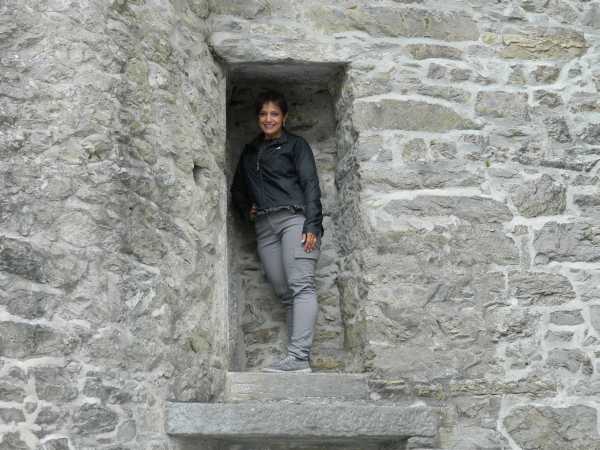 You never know what lurks in the shadows.

Cork – Like Venice, Cork City is built upon water. The city center is built on an island connected by many bridges. The city views were amazing and the architecture interesting.  We enjoyed the local pubs for their corned beef salad sandwiches,  local stores for their beautiful handmade items and the city for it edgy vibe and friendly people. We climbed to the top of the tower at St. Anne’s Church and enjoyed the breath-taking 360 degree views.

We enjoyed visiting this town seeped in history. It reminded us a bit of San Francisco.  We especially enjoyed the English Market, with its stalls of traditional Irish food as well as food from all over the world.  We purchased fresh bread, three types of cheeses that we had never tried ( loved them all), rosemary and basil olives, sun-dried tomatoes in herbs and olive oil, and Irish Spiced Beef.  We then had an enjoyable picnic on the green with enough left over for dinner. 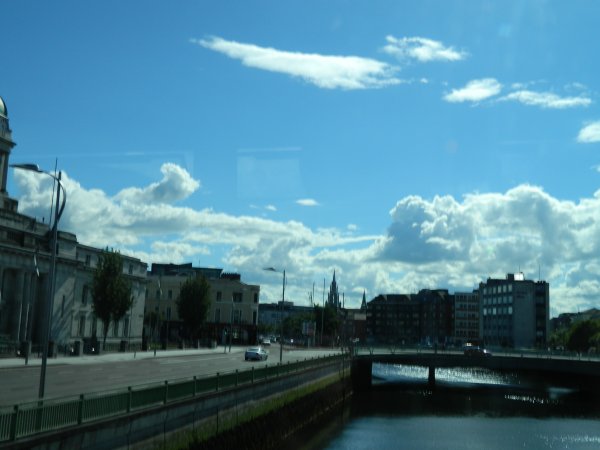