Upon leaving Paris, we decided to travel just 60 miles south to the small town of Outarville, France in order to attend the Innov-Agri Equipment Show. This show is held in different countries throughout Europe and is only held once every two years. We were glad that we scheduled this show into our trip.

Areal view of the Innov-Agri show. Notice the equipment lined up around large demonstration fields.

Upon entry to the show grounds, it soon became obvious that there were differences, as well as similarities to American farm shows. Just as their American counterparts, the European show contained various manufactures from many different facets of the agriculture industry.  It soon became obvious that this show covered a much larger area and that  it required greater prior planing.  The larger area did not offer additional room for equipment displays, but rather provided areas for demonstration purposes. Crops had been strategically planted throughout the show grounds, and were at various growth stages.  This was done to provide equipment manufactures with an optimum way to showcase their latest models.  There is no better way to test a chopper’s performance than to run it through mature corn, side by side with the competition.  We enjoyed the day exploring the show, talking with fellow agriculturists, and looking at a great deal of equipment representing many areas of the agriculture industry.

This large hose reel with a water cannon attached to the end, appears to be a European irrigation system of choice. They are very common throughout the countryside and operate similar to the garden sprinkler that pulls its self across the yard.

A supplier of soil amendments put together this display showing the benefits of their product. It is apparent that prior planning goes into this show.

We then lazily drove through the French countryside enjoying the sun shinning on the of fields full of droopy headed sunflowers, drying corn, dry- farmed walnut orchards, and the occasional fortress rising above them all.

We chose the feudal village of Sarlat to use as our home-base while exploring this rich valley.  Arriving  early on market day we discovered a rich array of strawberries, fresh vegetables, walnuts, cheeses, and a selection of the regions specialty, “foie gras” (enlarged livers from force fed geese and ducks costing about $50.00 per pound).  We shopped for fresh ingredients for dinner, but  both decided against the foie gras. 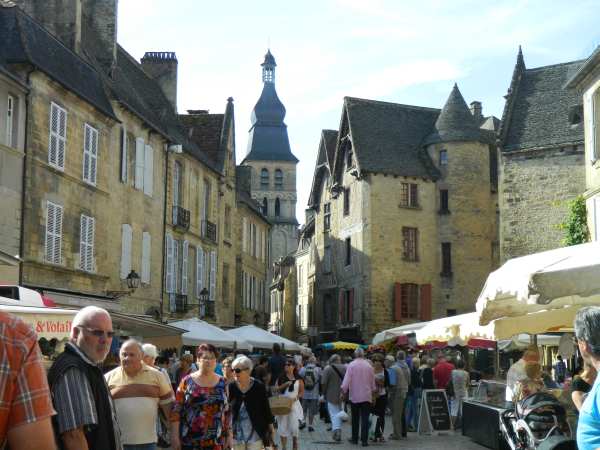 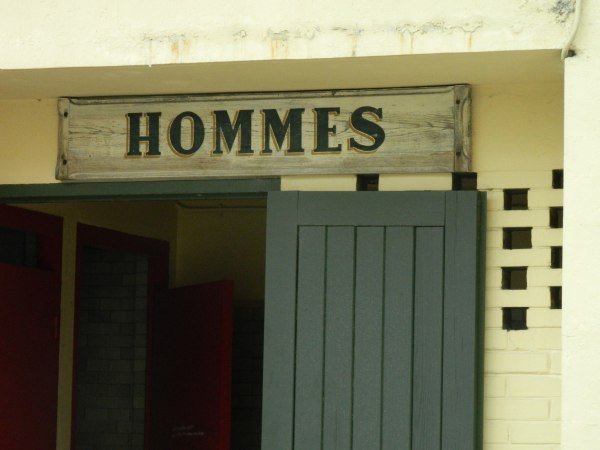 Wanted to add this to my red meat project, but for the life of me could not figure out what it was (after careful examination it appears to be large rabbit).

The beautiful scenery and the warm weather enticed us to rent a canoe. We lazily drifted down the Dordogne River through several small hillside towns, each with their own fortress on the highest mountain top. We just docked our canoe when we wanted to look around these sleepy, relaxed towns.

Great day for a canoe trip.

The river views were amazing.

Even the sights between towns is awe inspiring.

One of several river side villages.

Chateau above our campground. Still a private residence.

We found out that this area is world-famous for their limestone caves decorated with prehistoric art.  We toured the Font de Gaume cave, and were surprised by the sense of movement, and sophistication we saw in these mysterious Cro-Magnon drawings and etchings.  Photographs are strictly forbidden so we have added several Google images in order to share our experience. 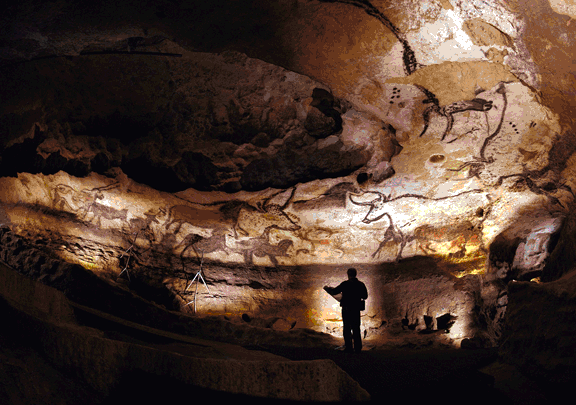 Google image of cave interior. Scientists claim that the drawings are from between 15,000 and 10,000 BC.

Image of cave interior, thanks again to Google images.

2 thoughts on “Final Days in France”

There was an error retrieving images from Instagram. An attempt will be remade in a few minutes.