At the beginning of our journey we thought we would have time to visit “everywhere”.  Of course in reality, we knew that was not true, but we didn’t know how true!  There are so many places we felt we had to skip because of our time restraints; places we really wanted to visit.  I guess that leaves us with future destinations for the next excursion.

Beautiful weather, siestas and cultural pride were all evident in Seville.  The architecture was beautiful and the history immense.  As the “gateway to the new world”, great explorers like Ferdinand Magellan and Amerigo Vespucci were sailing from this port in the 16th century. During this time,  Seville became an economic and cultural center for Spain.

We enjoyed walking through this lively town.  There were activities everywhere; free concerts in the park in the evenings, flamenco music and dancers, students from the university everywhere, and cloistered nuns selling rosaries and unleavened crackers from behind a wall  where you can speak to them, but not see them.  They put your items on a revolving rack and turn it until you get your item. 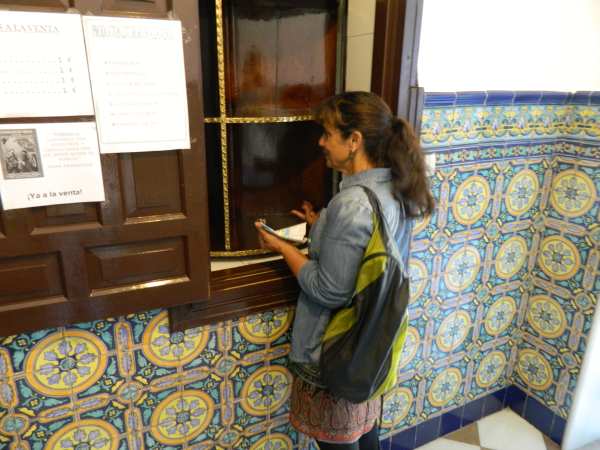 We bought a package of unleavened bread and a rosary from the cloistered nuns.

Unsure how we felt about bullfighting, we decided to tour the Bullfight Museum to give us a taste of what happens in the ring.  We walked through the bullring, saw the heads of a few bulls, the costumes of past matadors, the lances used by the picadores to pierce the neck of the bull, and the sharpened sticks the banderilleros use to stick into the shoulder of the bull. 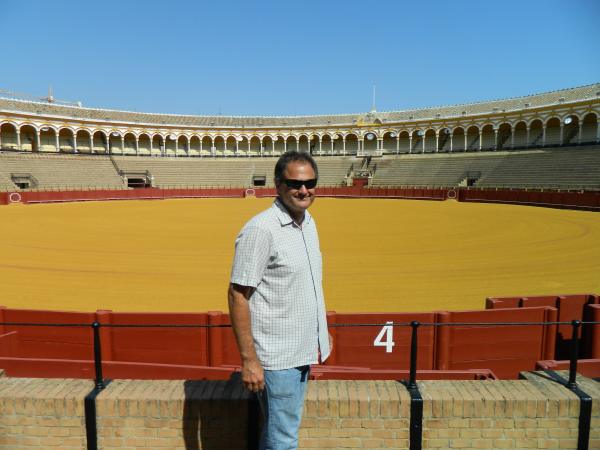 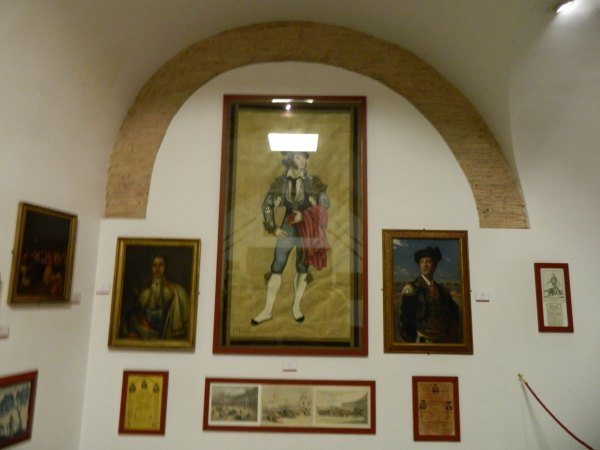 Tribute to some of the bravest matadors. 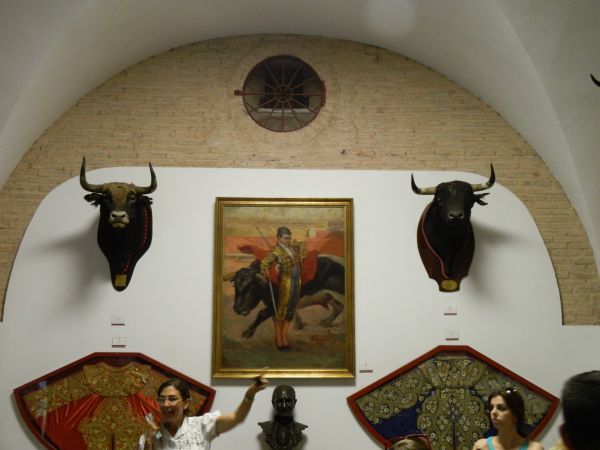 Tribute to some of the bravest bulls. 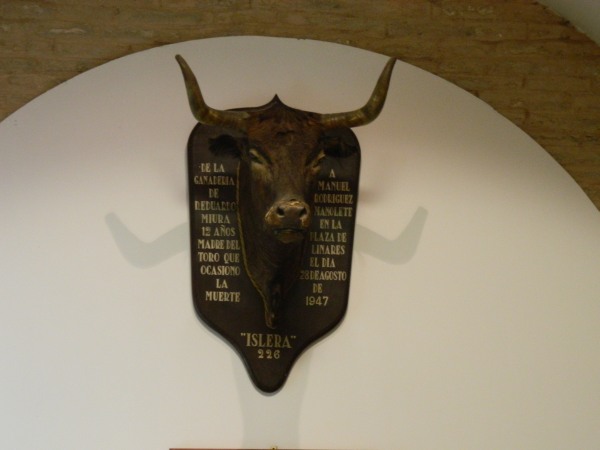 Once there was a bull so mean and evil that after killing a matador, the commission ordered him and his mother to be killed. Here is the head of the cow.  She even looks evil. 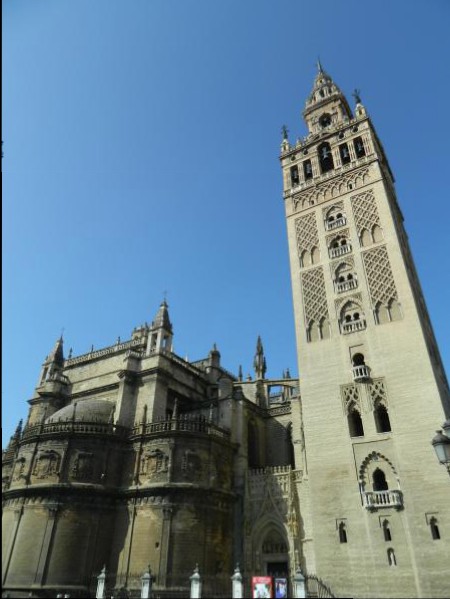 Centered in Seville, the Cathedral is the largest Gothic church in the world and contains the tomb of Christopher Columbus.

We camped in the small town of Dos Hermanas about 4 kms from Seville.  On our evening walk, we ended up in a town square that consisted of swings and a children’s play area, that was surrounded by small cafés and bars, all with outdoor seating.  There we saw families everywhere, even though it was nine at night.  We were enthralled, so we ordered a drink at a cafe and just sat and watched.  Kids were playing tag, running around, falling down, getting up, climbing fences, playing soccer, all without intervention from adults, yet under the close eyes of everyone there. It was amazing.  Adults of all ages were out enjoying the companionship of other adults. It was great. The weather had cooled and everyone (in the whole town it seemed) was enjoying an evening outside.

Saturday morning we walked into town again and saw a similar scene.   This time older men and women were out getting fresh bread, talking to each other, families were enjoying the 2 euro breakfast of a jamon sandwich, cafe, orange juice and fruit at the neighborhood cafes. We were welcomed into the cafe, graciously shown how to prepare our sandwich and then joined the group outside.  Amazing.

Although we, for sure, have not been to every city, it is hard to image a better city than Madrid. Each day we continued to be amazed at the architecture, the ambiance, and the wonderful people of this bustling city. 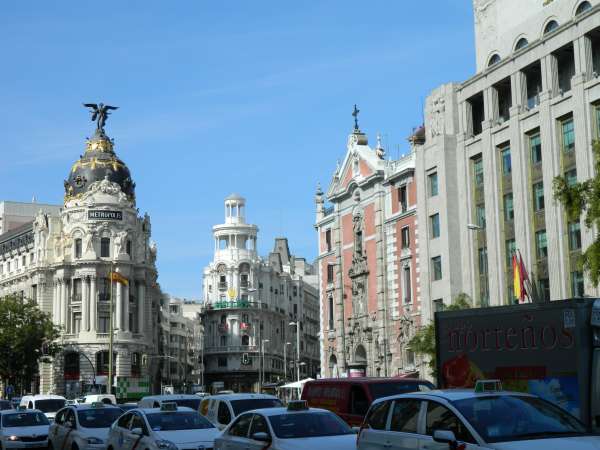 We visited three art museums over three days and enjoyed each of them.

The Prado – one one the world’s greatest museums with over 3000 canvases of incredible art including works by Francisco de Goya, Raphael (my favorite), Peter Paul Rubens, El Greco as well as being home to Diego Velazquez’s Las Menimas. We were amazed and a little overwhelmed by all of the masterpieces we examined and enjoyed.  (Sadly no photos were allowed in this museum.) 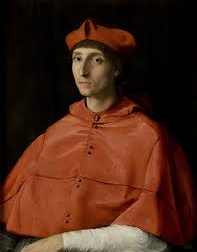 Raphael’s painting ” Portrait of a Cardinal”

The Thyssen-Bornemisza Museum- this museum was fun as it was smaller and contained art from many different periods, from Primitive all the way through Surrealism, and even Pop Art. 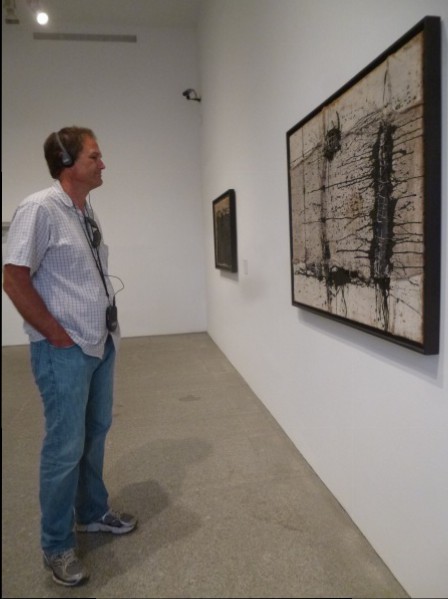 Centro do Arte Reina Sofia – this modern art museum was perhaps our favorite out of all the museums we have visited.  It is home to many Picasso’s, but his massive (11 feet tall and 25.6 feet wide) Guardia is an impressive masterpiece, and was thoroughly the most thought-provoking work we had ever seen as it captured a moment of horror in world history

This museum amazed us with works of art by Goya (Proto-Modern), Salvador Dali (Surrealism), Matisse and Picasso (cubism), Jackson Pollock (Abstract Expressionism), as well as Nouvel Art from the 1960’s through the 1980’s. 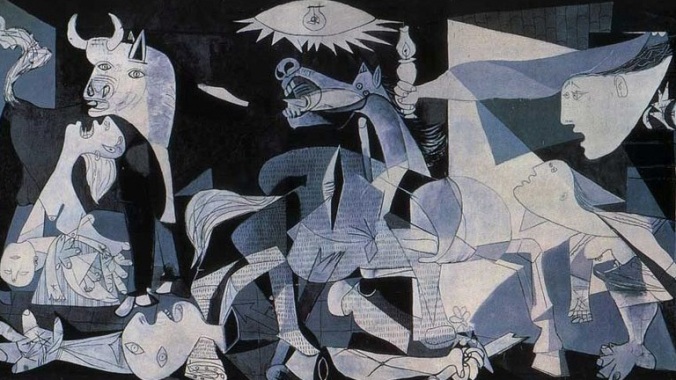 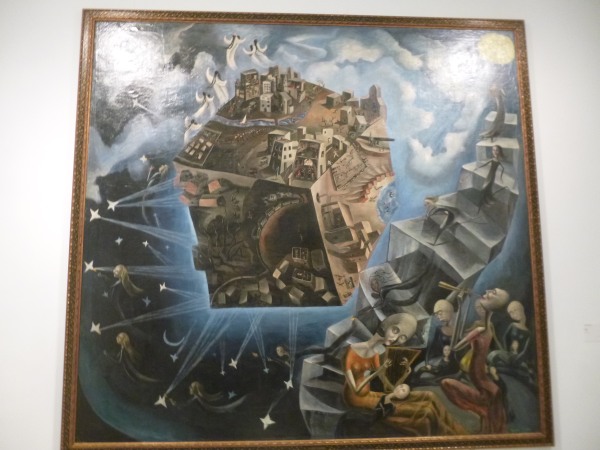 The Modern art of Angeles Santos.  It makes you think.

Madrid seemed to have a magic all its own. The people were friendly and gregarious.  We enjoyed our times at Puerto de Sol,  where the first night we were served free tapas with our drinks. The next night the cook brought us out fresh rice and shrimp straight from the kitchen, and the waiter shared with us types meat and fish in Spanish so we could learn them and we taught him the names in English in return.

We were served sardines, salami, jamon and bread, all for the cost of a one euro cana (small beer). 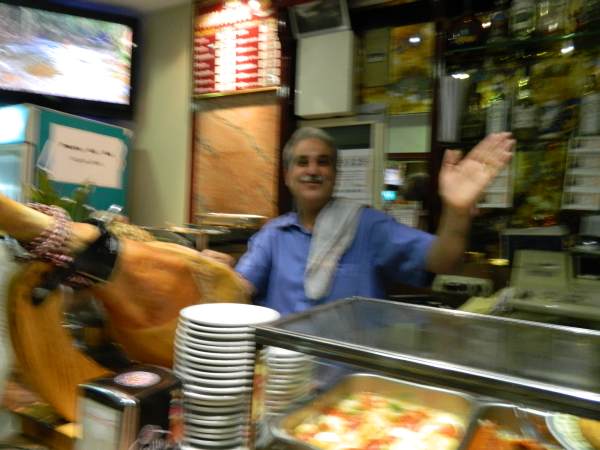 Everyone is friendly in Madrid, but none more so than the staff at Cafeteria Puerto de Sol.  This is a really bad picture but we felt we needed to put it here. 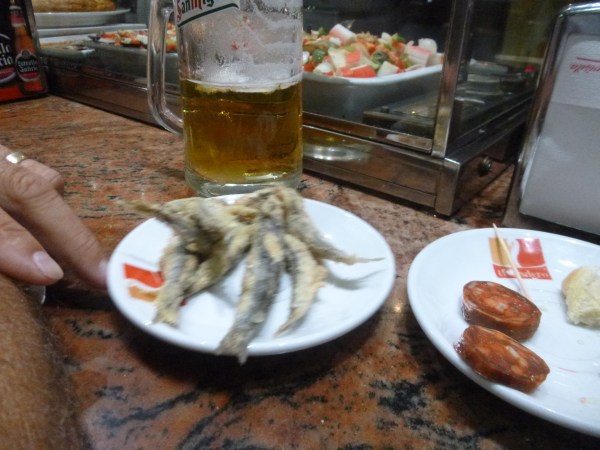 Another detour, this one for Mia Fraga Ball.

We followed road signs to Fraga, Spain. . As we drove through this town, we noticed everyone, every single man, woman, child, baby, and even dog, was wearing all white with orange bandannas.  We wondered, could it be there could be a soccer match in town?  We walked around this rather modern town of 15,000 people. After talking to many Fraga residence, we found out that we had arrived during the week of the Fiesta del Pilar. Fraga’s celebration called Pena Fragatina.   The community spirit was evident as evening drifted in, and the community rallied together and enjoyed Fraga’s traditional pastries, wine, music, dancing, and companionship. 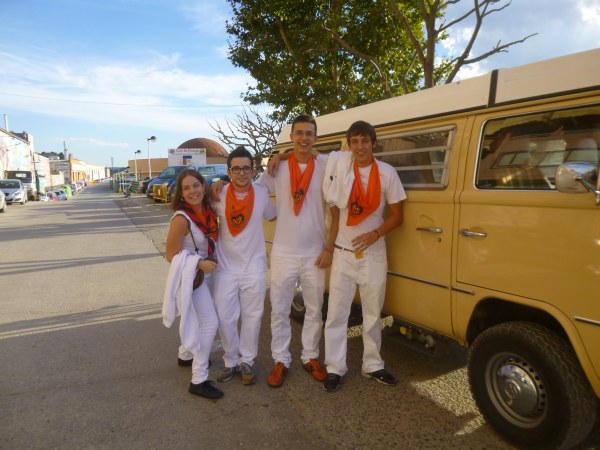 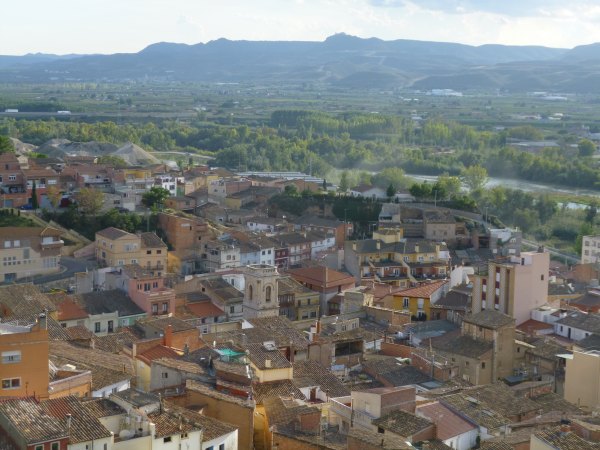 We made it! I thought everyone drove small cars because of the gas prices.  Not many lifted diesel trucks in this town.

The closest campground to Barcelona was 45 minutes away.  This is the first time on our trip that there would be such a distance to travel to get to the city.  The good news, the campsite offered a free shuttle into the city and back each day, and the campsite was directly across the street from the beach allowing us beautiful views all day long, and especially in the evening as the sky would change colors to glorious reds and grays as the sun dropped below the horizon. 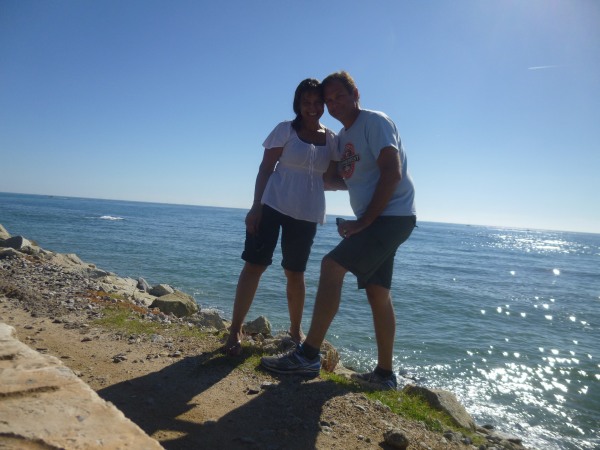 Enjoying the beach near Barcelona. 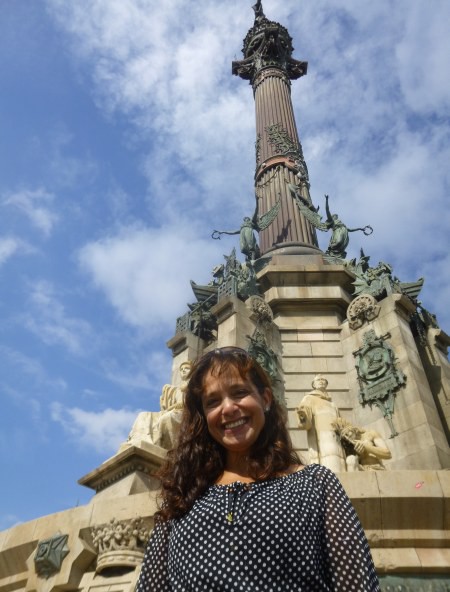 Christoper Columbus Memorial – Barcelona.  Notice the Indian kissing the cross the priest is holding.  Maybe a little controversial in the states. The statue is 200 feet tall. 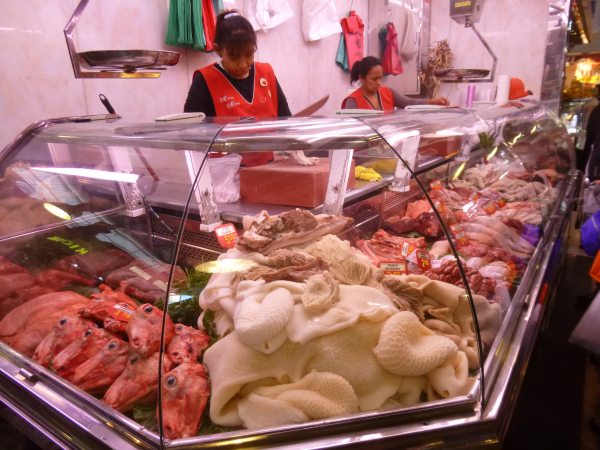 The La Boqueria market in down town Barcelona. offered a variety of yummy meats? 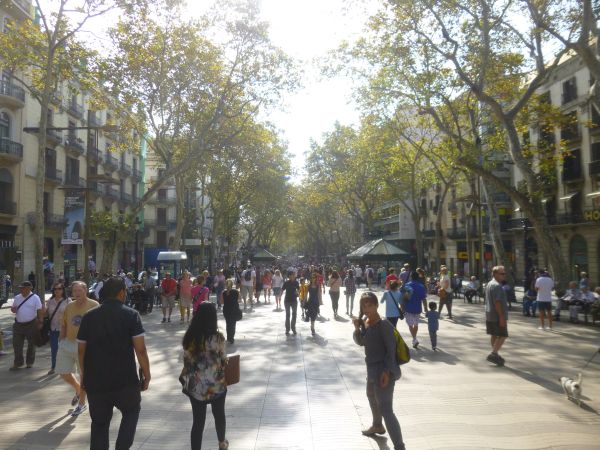 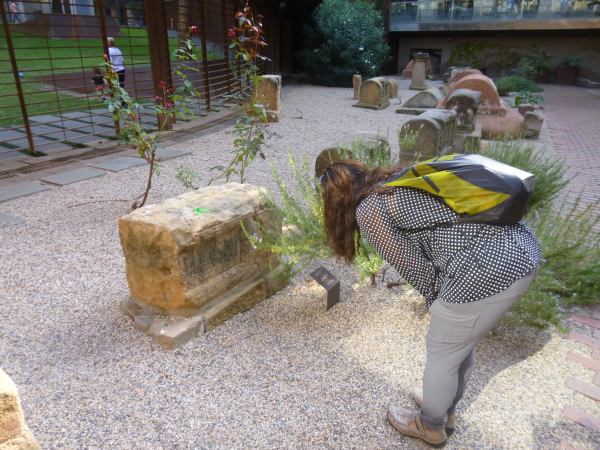 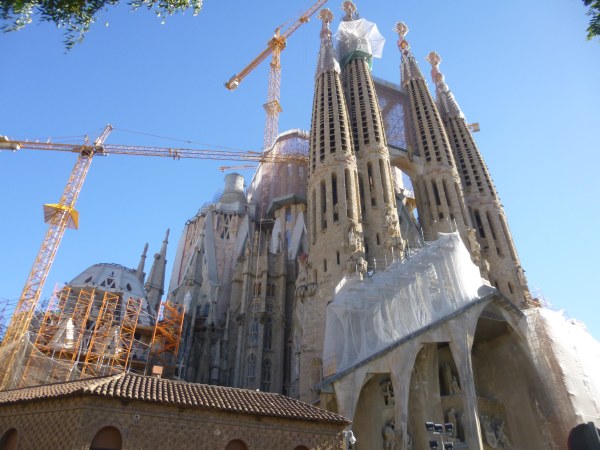 Sagrada Família, started in 1882 is still not complete. Notice the three cranes working amongst the hordes of tourists. 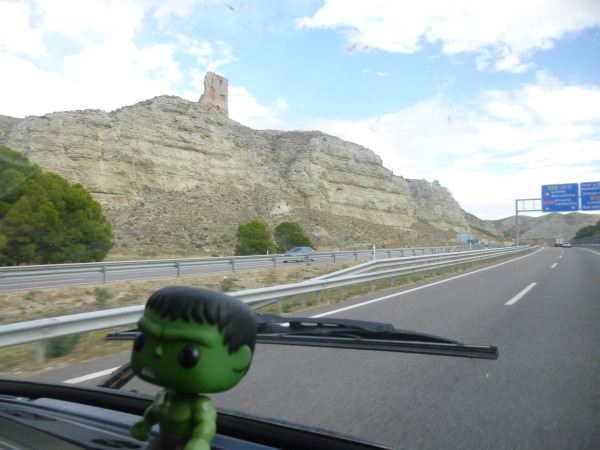 Work day and work breaks –  we needed a work day, so we purchased internet from the camp office for 24 hours. After working half a day, we decided to take a walk up the beach. What a beautiful day!  The walk began rocky and then ended at a pebbly expanse of perfect sunbathing beach.  Yep, work day indeed! 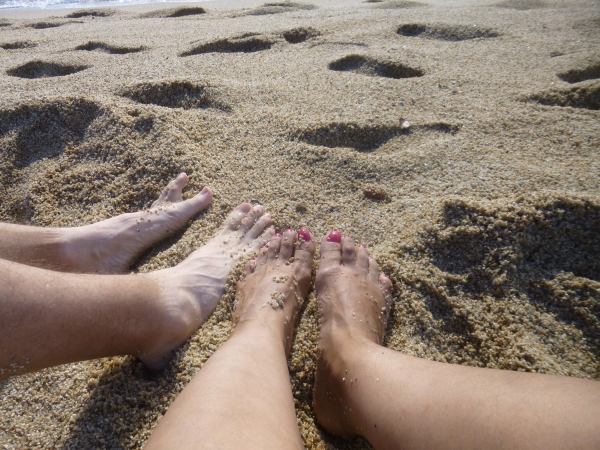