Just 60 miles outside of London is the historic and prestigious Cambridge University. This is where Isaac Newton, Darwin, Tennyson, and even Prince Charles studied. We enjoyed this busy town’s many stately buildings, stores and bookshops.   This is where DNA was originally modeled, the speed of sound measured (right outside the library foray), the atom was was first split, and electrons discovered.

While there, we took a punt, a flat boat guided by a long pole, on a canal tour. Our guide was informative and loved to tell us not just the facts, but also the stunts and jokes of this beautiful university town. He also explained that Cambridge University is not one, but instead 31 colleges that are applied to separately.

View from our rented punt. Ahead is the Cambridge Bridge Sighs. On the left is student housing and on the right is examination rooms. Hence the sighs. 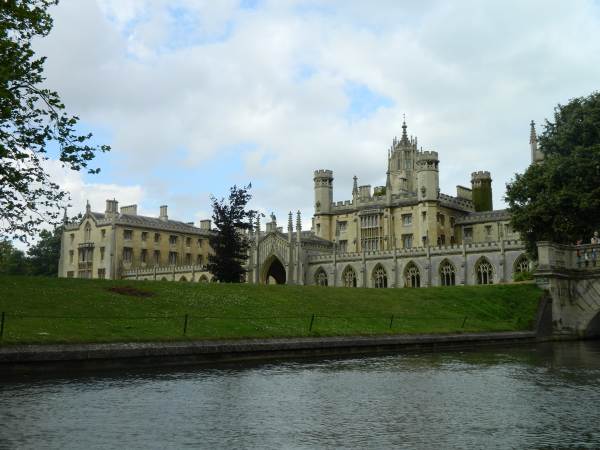 Cambridge University Cathedral. All the glass was removed during World War II for safe keeping. No one thought to map where the glass went, so it was like a jigsaw puzzle to get it back together.  It took nine years to get all the glass back in.

This is not only the name of the town in Shropshire, Englad, but also the first cast-iron bridge in the world, built here in 1779 to showcase a wonderful new building material that was developed by Abraham Darby III. We stayed in a beautiful country campsite in this quaint town that is home to the first iron wheels, steam-powered locomotive, and the cast iron bridge.

We started our tour the next morning watching a video explaining how these innovative men and women approached problem solving during this time of the Industrial Revolution. The amount of trial and error, analyzing and hard work that went into developing the wide spread use of iron was immense.

Upon visiting the bridge we noted the lack of rivets. We found out that lacking experience with cast iron, the builders made it as though they were constructing it out of wood and used traditional timber-jointing techniques like mortise and tenon and dowels.

We camped in a small town just outside London. After a wonderful evening of hiking, we woke early and took the “Tube” to Victoria Station, right into the city center. We decided to explore this busy city by foot.  We found our way to Westminster Bridge to get an better look at the House of Parliament and Big Ben.

We visited Westminster Abbey where kings and queens have been crowned (and buried) since 1066. We then headed across the street to visit a statue filled park, the first being a bronze model of  the inspirational former British Prime Minister, Winston Churchill.  We both admire him for his stand against tyranny and his ability to inspire people with his words and his actions. It is a testament to his character that he choose to visit bombed out cities during WWII, thus giving the people hope, instead of his staying safely afar. Some of the other statues in the park include other Prime Ministers such as Benjamin Disraeli, Sir Robert Peel, but also included are Abraham Lincoln, and Nelson Mandela.

We walked by the heavily guarded Number 10 Downing Street (home of the prime minister)  and to Trafalgar Square with the horse guards in their elaborate uniforms.

We enjoyed lunch at a small pub in the Soho area, walked through the Piccadilly Circus area, and then decided to take a bus to Notting Hill.  We enjoyed strolling through  quirky side streets and pretty gardens.  This area was of course, home to the 1999 film by the same name.. It is also the location for the films, About A Boy, Sliding Doors, The Italian Job, Love Actually and others.

Enjoying tea with a street performer in Piccadilly Circus.

4 thoughts on “Cambridge and London”